This is the first header photo I’ve taken with our new digital SLR  Canon Rebel T3i. Again, it’s the elusive red-breasted woodpecker, at my bird feeder in April 2013.

I caught this red-breasted woodpecker at my bird feeder after an ice storm. 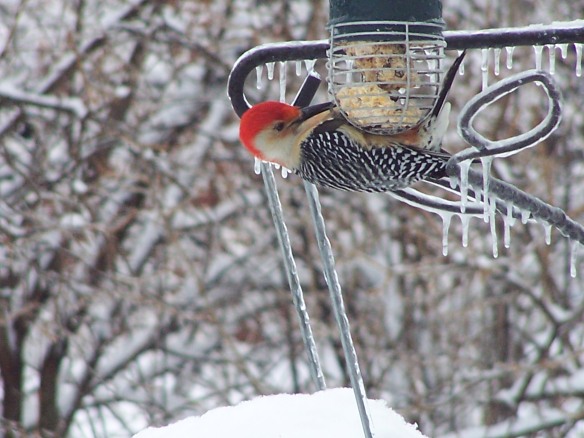 I took this sunset August 2012 over Lake Michigan from the beach in Glen Arbor, Michigan. The dune to the left is part of the Sleeping Bear Dune National Lakeshore.

Fall in Michigan: This was taken looking into the sun about an hour before sunset. As I took the photo, the sun make a white line down the center, which turned into a misty blur upon shooting. I liked this effect and thought this would make a great header photo for fall.

Previous: Spring tulips. I was hoping this would look like it was taken outside, but was actually taken in a greenhouse during a spring expo March 2011. (Credit: Huffygirl)

Previous: Empire Bluff, Empire, Michigan. Taken from the top of the bluff, looking out toward the Sleeping Bear Dunes National Lakeshore. (Credit: Huffygirl)

All photos used in Huffygirl’s Blog were taken by Donna Barry, unless credited otherwise.  No photos from this blog may be copied or reproduced without the photographer’s express permission.