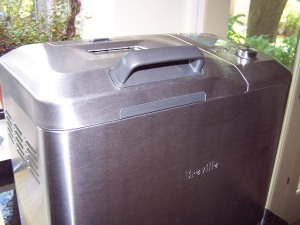 I’ve been on the quest for a perfect bread machine for some time and I thought this was going to be the one. Expensive. Highly touted. Carried exclusively by my favorite well-known upscale kitchen outfitter. Stainless steel exterior. Digital display. Lots of bells and whistles. And here’s the kicker: the mixing paddle is supposed to retract, leaving you with a small discrete slit in the bottom of the loaf, instead of hole like most bread machines too.

But, the mother of all did not deliver. Sure she was quiet – not cranking away

like an outboard motor like my old machine did. Sure there was a cute digital display with all sorts of elaborate choices. But alas, the mixing paddle did not retract, leaving a gaping hole in the bottom of the loaf the size of Cleveland. And did I get any of those nice neat loaves of bread like they show in the pictures? NOOOO.

So excited to give the mother of all bread machines a whirl, I put her right to use, barely out of the box. First I tried a two-pound loaf, using my favorite, tried and true bread recipe. Instead of a nice loaf of bread, it came out a like a misshapen blob, looking more like the bread meteor of death. Well, that was a big recipe, and one not originally made for bread machines,  so I thought I’d give her another chance.

Next I tried a one pound loaf, straight from the recipe book that came with the machine. This time the bread barely rose, causing my son to ask if it was  Passover already. And with the loaf of bread so short, the ginormous hole left by the paddle came right up through the top of the loaf.

Always the optimist, I tried again. I used my favorite bread recipe which had worked fine in my previous bread machine. I poured in all the ingredients. I set the machine for “dough only.” The dough mixed. It rose nicely, but was 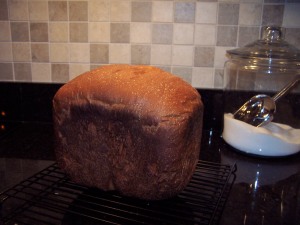 thrown sloppily all over the pan, instead of formed into a loaf shape. No worry – I took it out, removed the errant paddle, shaped it into a loaf and put it back in the pan. Then, I used the rise and bake setting to finish the loaf. Finally – a perfectly shaped loaf of bread! But, I’m sending the machine back any way, because I already have a machine that does this:

22 thoughts on “The Mother of All Bread Machines”