My 85-year-old mother died this week. She had a long life, most of it healthy despite a robust smoking  habit, some of it good, some not, but overall a life that was varied and interesting.  She was born of immigrant parents and grew up in a working class neighborhood of mostly Polish, Slovenian and others of eastern European descent. Her father worked in a factory, her mother stayed home raising kids, making chicken soup with homemade noodles, and poticca (poppy-seed bread) on special occasions, hanging her laundry on the line to dry while chatting over the fence to neighbors, and shopping at a neighborhood market, where you handed your list to the clerk behind the counter and they filled your order for you. My mother said they were “lucky” during the depression, because her father had a part-time job as a night watchman in a factory, while many other dads had nothing. Her growing up years are portrayed in pictures of her with her friends, sledding down a neighborhood hill, standing sweetly next to boyfriends, almost all dressed in army uniforms, and arm in arm with  girlfriends, walking  down the streets of Chicago or posing with the stone lions in front of the Art Institute. She quit high school in 11th grade to help support her family and worked in a factory making Karo syrup.  Maybe that’s why her hearing became so bad in later years, as there was no OSHA to protect workers then. Later, as an adult, she proudly completed her GED, not because she had to, but because she felt incomplete without that diploma, even though she grew up in a time when many people, especially women, did not complete school past the eight grade.

Mom and her daughters. That's me on the left.

She left her family in Chicago to move with her new husband to a farm in Michigan. Although she grew up a city girl, she traded it all for love, to pick pickles,  gather eggs, and sell tomato seedlings from our little greenhouse. She raised three children without the benefit of disposable diapers, ready-made formula or an automatic clothes washer.  She canned jam, hung clothes outside to dry and spent an entire day each week ironing. Her only phone was a black desk model on a party line. Her TV received  two channels. She styled her hair with pin curls and gave her daughters hideous home perms.

She was the only mom who taught her daughters how to play hopscotch AND poker. She carried cigarettes in her purse next to pictures of her grandchildren. She could curse like a sailor and sweet-talk the priest, all on the very same day.  One of her fondest memories was the day her grandchildren took her to…the casino.

People describe her as sometimes funny, sometimes fun, but always feisty.  She was not afraid to speak her mind. I always heard about it if she didn’t like my clothes or hair or what I was doing, and not just as a teenager, but as an adult too. Her motto was “don’t go to any trouble,” yet she made sure you went to all kinds of trouble when she wanted you to.  She was too impatient to ever wait in a line, but patient enough to comfort us through our childhood illnesses and boyfriend dramas. She deferred decision-making to her husband, but later as a widow, gained confidence to hire a roofer and plumber, get her car serviced  and learn how to drive through the car wash. 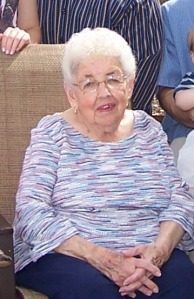 Mom at her 85th birthday party.

when we “made her” move to our local hospice. But in the short time she was there, she was blessed and touched and basked under the loving care of the folks there, who were able to see past her sometime cantankerous exterior to the needs  of a dying woman.

As we all whispered our goodbyes to her this Christmas day night, I think my youngest son said it best. He leaned into her ear and said “You had a good run Grandma, you had a good run.”

26 thoughts on “You had a good run Grandma”